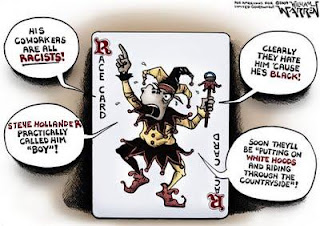 These dipshits throw out the race card every chance they get, because THEY don't get preferential treatment.

Because I was a uppity ni**ger

Comedian Michael Colyar has blasted United Airlines for allegedly booting him off a flight because he is black.

The 'Barbershop' star claimed he was forced off his flight at Dulles International Airport in Virginia after accusing a stewardess of giving a white passenger preferential treatment. 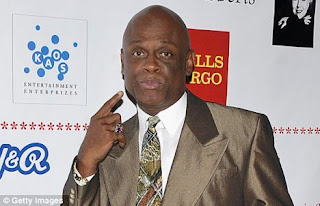 According to TMZ, he was removed from the flight after inquiring about how to make a complaint about the stewardess after she shot him 'dirty looks.'

How about cause he's a asshole?


'The flight attendant and her friend got just what they wanted, the n**ger off the plane. I'm sure they feel a great triumph in putting an uppity n**ger in his place,' the actor and comic blogged after the incident.

'At the least I should be suing United Airlines for theft of services, public humiliation and defamation of character,' he added.

TMZ said several people on the flight said Mr Colyar had become unruly passenger before he was removed.

Extra-Presidential. Or ... one day I won't need you at all.

Section 1- President: his term of office. Electors of President; number and how appointed. Electors to vote on same day. Qualification of President. On whom his duties devolve in case of his removal, death, etc. President's compensation. His oath of office.

1. The Executive power shall be vested in a President of the United States of America. He shall hold office during the term of four years, and together with the Vice President, chosen for the same term, be elected as follows:
2. Each State shall appoint, in such manner as the Legislature may direct, a number of electors, equal to the whole number of Senators and Representatives to which the State may be entitled in the Congress: but no Senator or Representative, or person holding an office of trust or profit under the United States, shall be appointed an elector. The electors shall meet in their respective States, and vote by ballot for two persons, of whom one at least shall not be an inhabitant of the same State with themselves. And they shall make a list of all the persons voted for each; which list they shall sign and certify, and transmit sealed to the seat of Government of the United States, directed to the President of the Senate. The President of the Senate shall, in the presence of the Senate and House of Representatives, open all the certificates, and the votes shall then be counted. The person having the greatest number of votes shall be the President, if such number be a majority of the whole number of electors appointed; and if there be more than one who have such majority, and have an equal number of votes, then the House of Representatives shall immediately choose by ballot one of them for President; and if no person have a majority, then from the five highest on the list the said House shall in like manner choose the President. But in choosing the President, the votes shall be taken by States, the representation from each State having one vote; a quorum for this purpose shall consist of a member or members from two-thirds of the States, and a majority of all the States shall be necessary to a choice. In every case, after the choice of the President, the person having the greatest number of votes of the electors shall be the Vice President. But if there should remain two or more who have equal votes, the Senate shall choose from them by ballot the Vice President.(The clause in italics was superseded by Amendment XII)
3. The Congress may determine the time of choosing the electors, and the day on which they shall give their votes; which day shall be the same throughout the United States.
4. No person except a natural born Citizen, or a Citizen of the United States, at the time of the adoption of this Constitution, shall be eligible to the office of President; neither shall any person be eligible to that office who shall not have attained to the age of thirty-five years, and been fourteen years a resident within the United States.
5 . In case of the removal of the President from office, or of his death, resignation, or inability to discharge the powers and duties of the said office, the same shall devolve on the Vice President, and the Congress may by law provide for the case of removal, death, resignation, or inability, both of the President and Vice President, declaring what officer shall then act as President, and such officer shall act accordingly, until the disability be removed, or a President shall be elected. (This clause has been modified by Amendment XX and Amendment XXV)
6. The President shall, at stated times, receive for his services, a compensation, which shall neither be increased nor diminished during the period for which he shall have been elected, and he shall not receive within that period any other emolument from the United States, or any of them.
7. Before he enter on the execution of his office, he shall take the following oath or affirmation:

Section 2 - President to be Commander-in-Chief. He may require opinions of cabinet officers, etc., may pardon. Treaty-making power. Nomination of certain officers. When President may fill vacancies.

1. The President shall be Commander-in-Chief of the Army and Navy of the United States, and of the militia of the several States, when called into the actual service of the United States; he may require the opinion, in writing, of the principal officer in each of the executive departments, upon any subject relating to the duties of their respective offices, and he shall have power to grant reprieves and pardons for offenses against the United States, except in cases of impeachment.
2. He shall have power, by and with the advice and consent of the Senate, to make treaties, provided two-thirds of the Senators present concur; and he shall nominate, and by and with the advice and consent of the Senate, shall appoint ambassadors, other public ministers and consuls, judges of the Supreme Court, and all other officers of the United States, whose appointments are not herein otherwise provided for, and which shall be established by law: but the Congress may by law vest the appointment of such inferior officers, as they think proper, in the President alone, in the courts of law, or in the heads of departments.
3. The President shall have the power to fill up all vacancies that may happen during the recess of the Senate, by granting commissions, which shall expire at the end of their next session.

Section 3 - President shall communicate to Congress. He may convene and adjourn Congress, in case of disagreement, etc. Shall receive ambassadors, execute laws, and commission officers.

He shall from time to time give to the Congress information of the state of the Union, and recommend to their consideration such measures as he shall judge necessary and expedient; he may, on extraordinary occasions, convene both Houses, or either of them, and in case of disagreement between them, with respect to the time of adjournment, he may adjourn them to such time as he shall think proper; he may receive ambassadors, and other public ministers; he shall take care that the laws be faithfully executed, and shall commission all the officers of the United States.

The President, Vice President, and all civil officers of the United States, shall be removed from office on impeachment for, and conviction of, treason, bribery, or other high crimes and misdemeanors.
Posted by Rich T at 6:48 AM No comments: 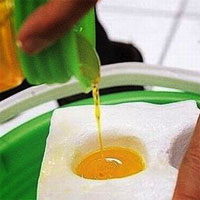 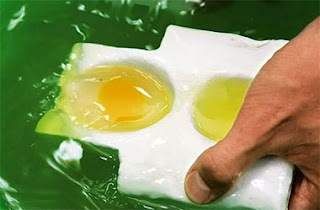 
Fake eggs are still going strong in China, despite the hilarity of it all to people outside of the Mainland PRC.

Man-made eggs: using man-made materials to make chicken eggs.
An Insider’s Report: In order to tell the difference between man-made and natural eggs, the first method is to inspect the shell. Man-made eggshells are particularly shiny and if the egg is opened, the egg white is not as sticky as a natural egg and is easily mixed in with the egg yolk. There may also be a light chemical smell coming from the egg yolk/white, whereas natural eggs have a fresh smell.
A man made egg has a cost price of 5 fen (1fen=0.01RMB — 1USD=6.83RMB). The lowest sales price found is 2jiao (1jiao=0.1RMB). One person can manufacture aprox. 1500 eggs in one day.

Man-made eggshells are made from Calcium Carbonate (CaCo3). The egg whites and egg yolks are made from the following materials: Alginic Acid, Potassium Alum, Gelatin, Calcium Chloride (with water) and artificial coloring. 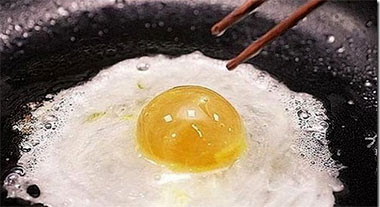 If fake, the yolk will quickly break up when fried

Man-made eggs are manufactured with chemicals, most importantly through the calcification of Alginic Acid.

The actual formula described above for Alginic Acid is C6H8O6 + some form of Na, which we were unable to locate. If anyone has an idea about this particular molecule, feel free to add a comment!). Man-made eggs are basically solidified gel. Most of the ingredients are additives that are regulated under Chinese law. None of these additives have any health benefits; man-made eggs cannot be considered a viable alternative to natural eggs. Many of the ingredients involved in the manufacture of man-made eggs come in industrial and commercial forms.