New from province of Dearbornistan. 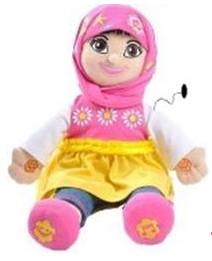 The latest toy has hit the shops... a talking Muslim doll.

Let See How Stupid These Two Are

These two idiot kids can't even drive a car, let alone launch one from a standing start.  From the Woodlands, Tx.


Well, the driver on the left was 23 and called his parents immediately. As soon as we placed him in cuffs his mom started screaming to go to the hospital. So we sent him to the hospital and decided to cut the other guy loose due to the kid not going to jail. Warrants are being issued for both of their arrests now.
[...]
We recieved [sic] a 911 call (from a witness) saying that a major accident just accused and the other corvette was attempting to leave the scene. And the other vette wasn’t drivable. Due to it being a major accident, we have to investigate.
So there’s probable turkey number one, being bailed out by his mom. Despite being completely irresponsible and likely getting arrested, I just have this bad feeling (from experience) he may get his C5 back.

Here are some good link to valuable info in-light of events occurring.  If it doesn't happen, it's still great info.  Just like how Pap-pap & Me-maw used to do.


*  Pioneer Essentials
Even if cash-poor, ranchers of the Old West coveted a rack of shiny pots and pans, preparation standards of the day didn’t allow fixing a meal with anything but the most basic cookware.

*  Soap Making  Soap for good and vibrant health is a vital item in any home.
Without soap we would not be able to have clean bodies or clean clothes.

*  Making Charcoal Why Charcoal?  The many uses of charcoal is very important to your survival.

*  Tanning Hides The Indians tanned hides in several ways and by different substances according to the tribe. Hides were used for clothing and blankets.


*  How to Wash on a Washboard

*  Rendering Lard While lard isn't considered a food, it was vital to the cooking process for many years.
Posted by Rich T at 8:04 PM No comments:

"I got inside your OODA loop; that's what happened"

OODA loop humor from a reader:
Wanna hear something funny? I first read about the concept of OODA loop in your blog a few years back.

Anyway, I have a seven year old boy who is interested in, of all things, strategy.

Particularly military strategy. So I had recently explained the concept and definition of the OODA loop to him. Meanwhile, he has spelling tests each week in school.

And recently, I found the source of the words the teacher is using, and let him study each week's words in advance over the weekend - ensuring a perfect score Monday morning.

Anyway, the teacher noticed that he was suddenly getting 100%, and she asked him what had changed.

His reply (which caused the teacher to call me - she was a bit alarmed) was "I got inside your OODA loop; that's what happened"...

A couple in a North Texas community is under siege by the Gestapo group known as Remuda Ranch Estates Homeowners Association. 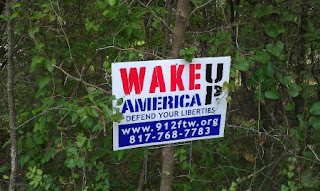 It seems that they put up the above yard sign and the President of the HOA is a pResident obama 1st class ass licker and a supporter of the Dallas OWS .

Well he got his thong wedged up in his ass over the sign..  And then gets his bestest friend crooked judge to really lay it on them with a $7k fine.

Here they are below. 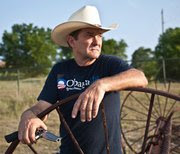 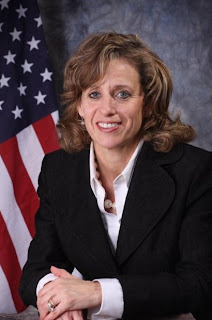 Now these are two fine upstanding citizens and in the course of this "misunderstanding" have scrubbed the FB pages of all political photos.  Go to the link for those at The Blaze for the before screenshots.
These are some of the questions from the Blaze reporter.

The more digging we do into this story, the more questions arise:
The Judge who levied the huge fine has ties to at least one of the board members of the complaining HOA. These photos used to live on the Facebook page of  Kathy Kornegay Chruscielski (HOA board member and personal friend of the Judge Lynn Marie Johnson).

Now it gets deeper.

When the house was purchased, Clare & Tommy Russel were not aware of a HOA nor did they pay the extortion $$$ called dues.  The cherry on this is they ave documented from the deal.

Boy this all all the makings for a made for TV show.
Posted by Rich T at 4:54 PM 1 comment:

It pisses me off that folks just don't have the balls, leadership, or what ever you want to insert (foot up their ass) to do the right thing.....

Until it hits the news & blogs.

Then it's all CYA and fuck the little folks

How much you wanna bet the union was shielding them.

I posted here about it.  FNC had it here.  The Feral Irishman here.

Well it looks like the chickens are coming home to roost.

Seventeen workers from the Tower Defense and Aerospace plant in Detroit have reportedly been suspended after an undercover investigation showed them smoking what appeared to be marijuana during their lunch break.

The plant reportedly manufactures armored parts for U.S. military trucks and planes, including parts for Humvees and Stryker combat vehicles to be sent to Afghanistan and Iraq.

After the station's report, officials from the plant said in a statement that 17 of its employees have been "suspended pending discharge."

"The story reported earlier this week by Fox 2 in Detroit highlighted a very serious issue of unacceptable and reckless employee misconduct that was already under investigation by the company," Derek Fiebig, an official from the plant, said in a statement.

"Working as expeditiously as possible within the bounds of the legal union contract, seventeen employees have been suspended pending discharge. In addition, we are working with the union to ensure that workers will no longer be allowed to leave the premises during the work day," Fiebig said.

"These actions supplement the existing rigorous drug screening and background checks used by Tower to hire 150 new employees since acquiring this business," he added.

1 Less Sucking on My Wallet

Yep...Title says all about I feel about this "martyr". To bad more don't follow his lead.


An illegal-immigrant student in Texas who committed suicide the day after Thanksgiving left letters saying he felt trapped by his lack of opportunities and, according to his family, he “decided to sacrifice himself for the cause.”

High school senior Joaquin Luna, 18, dressed in a suit, kissed family members, went into the bathroom and shot himself, according to his brother, Diyer Mendoza. In the letters he said he had lost hope in the chances for the Dream Act, which is legislation that would have legalized illegal-immigrant students and young adults but which was blocked in Congress last year.

“He was actually doing this for the cause, mainly the Dream Act,” Mr. Mendoza said. “He was doing this to show politicians, to show that something had to be done because there are a lot of kids out there in the same situation.”


Iran erupted in a fresh frenzy of animosity towards its old imperial foe on Sunday as MPs chanting "death to England" voted to expel Britain's ambassador to Tehran and threatened his mission with a reprise of the 1979 hostage crisis. 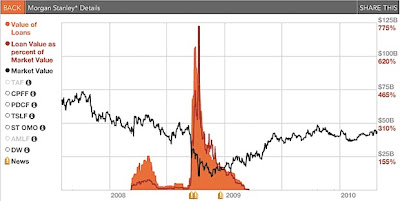 After almost a year of litigation, Bloomberg finally won access to information detailing the full scope of the Fed’s bailout of the banks. The chart below, detailing the daily amounts MorganStanley was borrowing from the Fed, relative to its market value should keep European officials awake at night:


Ladies and Gentlemen, this is what a lender of last resort looks like. What you’re looking at here are three lines. The black line is Morgan Stanley’s market capitalization, which tends to hover in the $40 billion range but which fell as low as $9.8 billion in November 2008. The orange line is the amount that Morgan Stanley owed to the Federal Reserve on any given day — an amount which peaked at $107 billion on September 29, 2008. And the red line is the ratio between the two: Morgan Stanley’s debt to the Federal Reserve, expressed as a percentage of its market value. That ratio, it turns out, peaked at some point in October, at somewhere north of 750%.

Kerodin has a post this morning that we are watching the collapse.

Then this morn Drudge has that the Kuwaiti government has collapsed due to corruption.

It's a crap shoot to see which government in the next to fall. 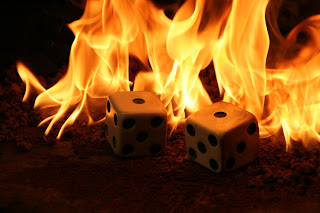 
Kuwait's cabinet has resigned after protesters and opposition deputies demanded that the prime minister step down over allegations of corruption, state-run television has reported.
"The prime minister [Sheikh Nasser Mohammad al-Ahmad Al-Sabah] has submitted his resignation to the emir," Kuwait TV said, without specifying whether it had been accepted.

Earlier, opposition member Khaled al-Sultan said the cabinets's resignation was accepted amid a bitter political dispute between the prime minister and opposition MPs.

"We are waiting for the appointment of a new prime minister before parliament is dissolved in order to be assured of fair elections," the Sultan told reporters outside parliament.