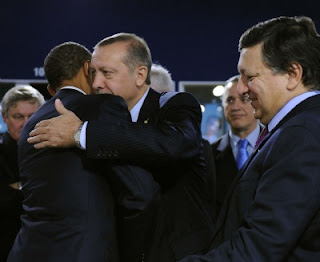 While in Cannes, our stupid-endous pResident decided to shake the hands of Sarkozy & Merkel.

But the terrorist Erdagon, gets a big Man-love hug.

Ya know he gott's ta take care of da peeps.

While the below vid portrays the true nature of the "religion of peace", I mean PIECE. 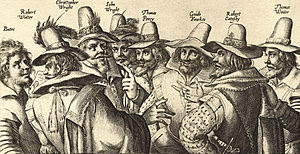 Read the rest at the link.  A very interesting and informative read.

The Gunpowder Plot of 1605, in earlier centuries often called the Gunpowder Treason Plot or the Jesuit Treason, was a failed assassination attempt against King James I of England and VI of Scotland by a group of provincial English Catholics led by Robert Catesby.

The plot was revealed to the authorities in an anonymous letter sent to William Parker, 4th Baron Monteagle, on 26 October 1605. During a search of the House of Lords at about midnight on 4 November 1605, Fawkes was discovered guarding 36 barrels of gunpowder—enough to reduce the House of Lords to rubble—and arrested.

The conspirators' principal aim was to kill King James, but many other important targets would also be present at the State Opening, including the monarch's nearest relatives and members of the Privy Council.

"The independence of Texas is recognized! Don't you see it in the papers? 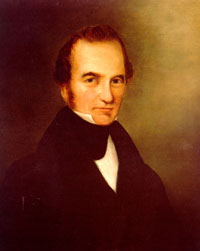 Stephen Fuller Austin was born November 3, 1793 in the mining regions of southwestern Virginia (Wythe County). He was the second child of Moses Austin and Mary Brown Austin. On June 8, 1798, when he was four years old, his family moved 40 miles west of the Mississippi River to the lead mining region in present-day Potosi, Missouri. His father Moses Austin received a Sitio from the Spanish government for the mining site of Mine à Breton, established by French colonists.

When Austin was eleven years old, his family sent him to be educated at Bacon Academy in Colchester, Connecticut and then at Transylvania University in Lexington, Kentucky, from which he graduated in 1810. After graduating, Austin began studying to be a lawyer; at age twenty-one he served in the legislature of the Missouri Territory.

Austin was left penniless after the Panic of 1819, and decided to move south to the new Arkansas Territory. He acquired property on the south bank of the Arkansas River, in the area that would later become Little Rock. He made his home in Hempstead County, Arkansas, before moving to the Texas territories.

During Austin's time in Arkansas, his father traveled to Spanish Texas and received an empresarial grant that would allow him to bring 300 American families to Texas. Moses Austin was attacked on his way back to Missouri. Upon returning home, Moses became ill with what was believed to be pneumonia and died on June 10, 1821. He left his empresario grant to his son Stephen. Though Austin was reluctant to carry on his father's Texas venture, Austin was persuaded to pursue the colonization of Texas by a letter from his mother, Mary Brown Austin, written just two days before Moses Austin died.

Austin boarded the steamer Beaver and departed to New Orleans to meet Spanish officials led by Erasmo Seguín. His party traveled to San Antonio with the intent of reauthorizing his father's grant, arriving on August 12. While in transit, they learned that Mexico had declared its independence from Spain, and Texas had become a Mexican province rather than a Spanish territory. A San Antonio native, José Antonio Navarro, having like visions of the future of Texas befriended Stephen F. Austin, and a lasting association developed between the two. Navarro, proficient with Spanish and Mexican law, would assist Austin in obtaining his empresario contracts. In San Antonio, the grant was reauthorized by Governor Antonio María Martínez, who allowed Austin to explore the Gulf Coast between San Antonio and the Brazos River to find a suitable location for a colony.

Austin advertised the opportunity in New Orleans, stating that the land was available along the Brazos and Colorado rivers. In December 1821, the first U.S. colonists crossed into the granted territory by land and sea, on the Brazos River in present-day Brazoria County, Texas.

By late 1825, Austin had brought the first 300 families to his settlement (The Austin Colony), now known in Texas history as the Old Three Hundred. Austin had obtained further contracts to settle an additional 900 families between 1825 and 1829. He had effective civil and military authority over the settlers, but he was quick to introduce a semblance of American law - the Constitution of Coahuila y Tejas was agreed on in November 1827.

He was active to promote trade and to secure the good favor of the Mexican authorities. With the colonists numbering over 11,000 by 1832, they were becoming less conducive to Austin's cautious leadership, and the Mexican government was also becoming less cooperative. It was concerned with the growth of the colony and the efforts of the U.S. government to buy the state from them. The Mexican government had attempted to stop further U.S. immigration as early as April 1830, but Austin's skills gained an exemption for his colonies.
The application of the immigration control and the introduction of tariff laws had done much to dissatisfy the colonists, peaking in the Anahuac Disturbances. Austin then felt compelled to involve himself in Mexican politics, Austin traveled to Mexico City on July 18, 1833, and met with Vice President Valentín Gomez Farías. Austin did gain certain important reforms; the immigration ban was lifted, but not a separate state government. Separate statehood required a population of 80,000 before it could be granted, and Texas had only 30,000.

In his absence, a number of events propelled the colonists toward confrontation with Santa Anna's centralist government. Austin took temporary command of the Texan forces during the Siege of Béxar from October 12 to December 11, 1835. War began in October 1835 at Gonzales. The Republic of Texas, created by a new constitution on March 2, 1836, won independence following a string of defeats with the dramatic turnabout victory at the Battle of San Jacinto on April 21, 1836.

In December 1835 Austin, Branch Archer and William H. Wharton were appointed commissioners to the U.S. by the provisional government of the republic. On June 10, 1836, Austin was in New Orleans when he received word of Santa Anna's defeat by Sam Houston at San Jacinto. Returning to Texas, he announced his candidacy for president of Texas. Austin felt confident he could win the election until with two weeks before the election, on August 20, Houston entered the race. Houston carried East Texas, the Red River and most of the soldier vote. Austin polled 587 votes to Sam Houston's 5,119 and Henry Smith's 743 votes.

Houston appointed Austin as the first Secretary of State of the new Republic; however, Austin served only around 2 months before his tragic death.

In December 1836, Austin was in the new capital of Columbia (now known as West Columbia) where he caught a severe cold; his condition worsened. Doctors were called in, but could not help him. Austin died of pneumonia at noon on December 27, 1836, at the home of George B. McKinstry right outside of what is now West Columbia, Texas. Austin's last words were "The independence of Texas is recognized! Don't you see it in the papers? 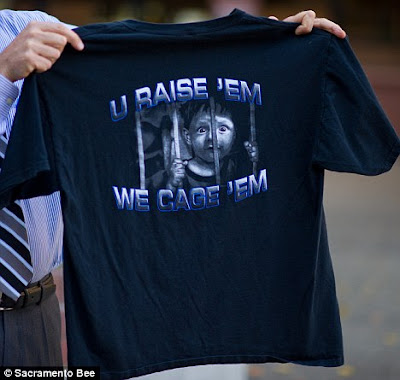 Not surprising is it?


A Northern California school police officers union has come under fire for selling t-shirts with a picture of a child behind bars and the slogan: “U raise ‘em, we cage ‘em.”

Not All Fears Are Phobias 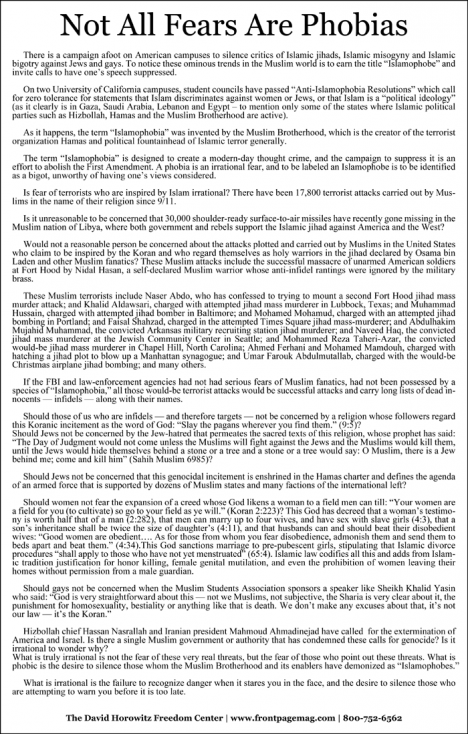 via Frontpage Mag
Posted by Rich T at 10:00 AM No comments:

Are You a Pacifist? 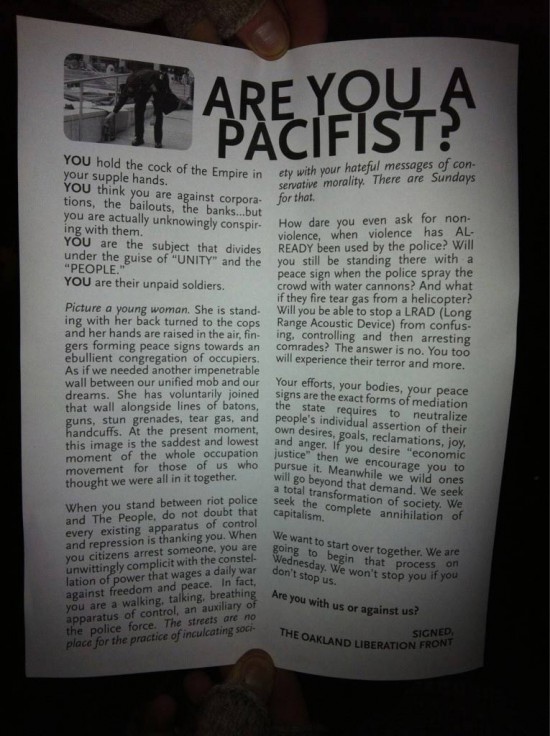 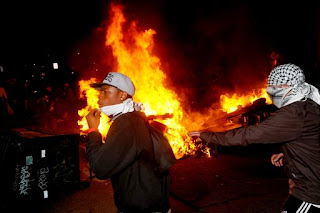 OAKLAND, Calif. (AP) - A day of demonstrations in Oakland that began as a significant step toward expanding the political and economic influence of the Occupy Wall Street movement, ended with police in riot gear arresting dozens of protesters who had marched through downtown to break into a vacant building, shattering windows, spraying graffiti and setting fires along the way.

"We go from having a peaceful movement to now just chaos," said protester Monique Agnew, 40.

About 3,000 people converged on the Port of Oakland, the nation's fifth-busiest harbor, in a nearly five-hour protest Wednesday, swarming the area and blocking exits and streets with illegally parked vehicles and hastily-erected, chain-link fences.

Port officials said they were forced to cease maritime operations, citing concerns for workers' safety. They said in a statement they hope to resume operations Thursday "and that Port workers will be allowed to get to their jobs without incident. Continued missed shifts represent economic hardship for maritime workers, truckers, and their families, as well as lost jobs and lost tax revenue for our region." 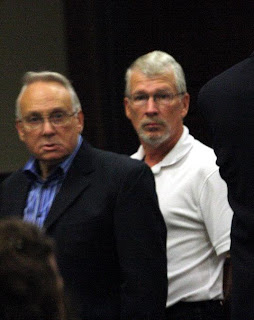 And today in local news....Intelligence doesn't always mean your smart or have common sense.

November 27, 2010...
Jerry Jordan shot a deer on property in Polk County that wasn't his property, and he didn't have the property owner's permission to shoot the deer.  Jordan was found skinning the deer on property in Wells Landing.  Jordan was cited by State Game Warden Ryan Hall for a tagging violation.  Jordan used a tag intended for a mule deer to tag a white tail doe.

April 14, 2011...
After numerous attempts to have the case dismissed in Polk County Justice of the Peace Precinct 2, David Johnson's Court, a date was finally set for a jury trial on April 14, 2011.  Jordan made contact with Game Warden Hall by phone and attempted to coerce Hall by threat using his position as a D.A. Investigator of Environmental Crimes from Montgomery County.  The conversations were recorded at the Polk County Criminal District Attorney's Office.

Due to Jordan's position as a public official, his case of now, coercion was brought before a Polk County Grand Jury and a court date was established.
October 2, 2011...Jerry Lee Jordan pleaded guilty to the felony of taking certain wildlife resources without consent of the land owner and the misdemeanor of coercion of a public servant.

Judge Trapp's punishment was harsh:  Jerry Lee Jordan permanently surrendered his peace officer's license and one year loss of hunting and fishing rights and privileges in the State of Texas.

The Polk County Criminal District Attorney's Office made it very clear that regardless of position or power, crimes and hunting crimes in Polk County will be dealt with harshly. 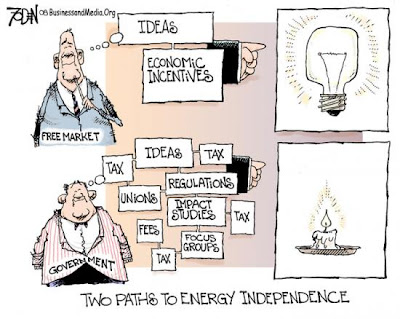 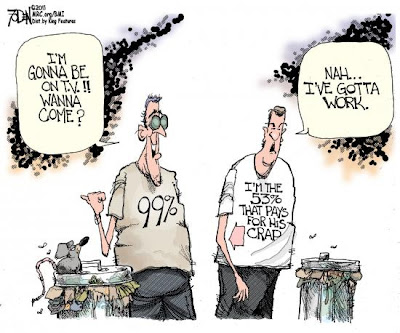 
October 31, 2011: During the Cold War, Russia (then the Soviet Union) was infamous for using assassins overseas to kill people, often exiled Russians, who were considered a threat. That sort of thing stopped, for a while, after the dissolution of the Soviet Union in 1991. But in the last decade, the Russian "wet work" (assassination) teams are back. This is considered an intelligence operation, as it is often used to eliminate those supplying foreigners with damaging information about Russia.