Does anyone have a cool scull & crossbones images.  Preferably hi-res.  Working on an idea for some image branding for us.

Either send me a email at the right side or comment with the link.

Another happy ending...compliments of a gun

via The Daily News


A 15-year-old-girl turned the tables on a pair of intruders early Saturday afternoon.

At 12:52 p.m., Texas City police received a call from the girl saying there was somebody trying to get into her house in the 7300 block of Meadowlark.

“She was home by herself in the bathroom and when she called — she was hysterical,” police Capt. Brian Goetschius said.

The teen said she heard the front door jiggle and when she looked out, she saw two men standing there, Goetschius said.

The girl called her father, her aunt and the police. Then she got her father’s handgun and went outside, Goetschius said.

One of the men had gone into the garage and was attempting to steal a pickup. The girl did not know where the other one was.

She confronted the man in the garage and he ran away, heading east on Meadowlark. He was followed by his accomplice, who had been inside, searching the house, Goetschius said.

“It had been ransacked,” the captain said.

LSW brings up a good point.  Watch for the fallout & screeching of how dare the parents have a gun that a teen has access to.

I was listening to the so called conservative talk show host saying it might not be a good idea for a teen to use a firearm to defend herself at home. To me, she done right and never should feel ashamed about brandishing a handgun in self defense to protect her home. 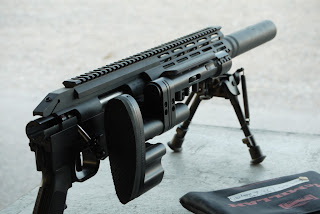 
McMillan has developed a rifle they call the C5, or Concealable Subsonic / Supersonic Suppressed Sniper System. It’s a rifle that breaks down into a 23.5 inch long package for easy transport in a backpack or briefcase, yet still is accurate out to 800 meters with a .75 MoA guarantee. But that’s not all

Getting geared up for aliens & zombies.

I'm undecided about it. 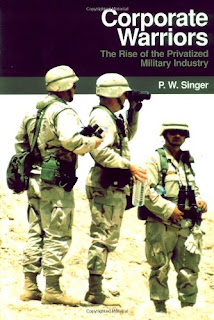 BBC (Spanish edition) via Activist Post has a article on how U.S. Department of Defense Counter-Narcoterrorism Technology Program Office (CNTPO) has transferred the war on drugs (WoD) to those PMC's.

CNTPO issued "no bid" contracts to PMC for operations in countries that the US wages the WoD.


The "no bid" contracts, issued under the Counter-Narcoterrorism Technology Program Office's $15 billion dollar budget, are described as "non-specific" and are said to be "juicy" for the private contractors. The Pentagon says "the details of each cost in very general contracts do not go through bidding processes."

Not only that, but there is no Congressional oversight to keep them in check as the subcommittee's claim that the ops are secret and not public info.

But this move is not without risk, as private mercenaries have known to operate outside of national and international laws.  "Here we go into a vague area where the rules of engagement are not clear and there is almost zero accountability to the public or the electorate," said Bagley.

The Pentagon maintains that it's perfectly legal, and mercenaries must follow strict parameters. However, Bagley points out that "few members of the Oversight Committees of the Senate and the House are aware, but they are required to keep secret, so all this flies under the radar."

Based on a 2009 DoDIG report , CONTPO has a history of letting these PMC's off their leash to do what they want.

The contracting officer (CO) is the one who holds the check book.  They are the ones who are warranted and are legally authorized to obligate, financially, the Govt.  Read the report to see the details of the below.

 Obtain a Theater Business Clearance before contract award for six task orders
from the Joint Contracting Command for Iraq/Afghanistan in Afghanistan.

When I worked for the Govt, ot was in the realm of Govt. property (GP).  Govt. Furnished property (GFP) must be tracked, accounted for, inventoried, marked as GP, etc. Especially sensitive equip.  The below is from Page 16 of the report.

Those who were in the service, what would your CO do if you lost one of those equipment?  You would get UCMJ'd & lose the $$$ of the acquisition cost.

As a bonus, why do they need encrypt gear?  NV?  There is commercial gear available for them to use.  No need to use GP.

There is a ton more in the IG report.  But it's from 2009 and the problems more than likely have not been fixed.

These mercenaries are allowed to wage war in countries, that Big Brother doesn't want to appear that they have invaded due to political fallout, with no form or fashion of oversight/accountablility from the command that issued the contracts or from Congress.

This should give us a clear picture of times to come CONUS.  But they will be worse.
Posted by Rich T at 10:51 AM No comments:

Defense Against the Psychopath

This pdf read lays out what to look for in a psychopath and how to counter them.

They must have used our lusterless leader as a case study.


The urge to save humanity is almost always a false-face for the urge to rule it.
H.L. Mencken

The Key Characteristics of a Psychopath