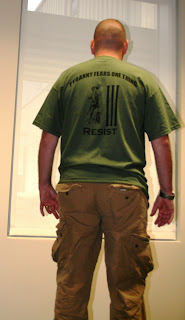 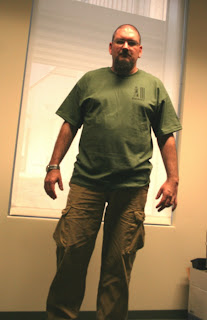 The shirt is 100% cotton & seams are double stitched.  The graphics are spot on.  It looks just like the pics below from the site.  Sam-Thanks for the Hi-res pic for the back.

The only bitch I have is the tag says mad in Hati.


So if you like them.  Head to III% Blog and pick one up and check out the other gear.

Here is the link to the design if you want to buy one.  Plus the shipping was free.

It's easy to go in and change up the color of the print & color/style of the shirt.  You know for the ladies & chilluns.

I was surprised just how easy the design process was.  Opens up many possibilities.

The shirt has been ordered and due to arrive on Jan 26.  I'll put up a post on the quality of it when it gets here.

Below the shirt is pricing.  Cost drops considerably with more items bought.

I am gonna pick up one irregardless of the cost.  Let me know what you think or if any changes to make it better. 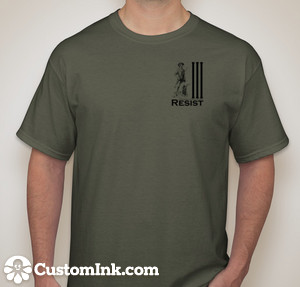 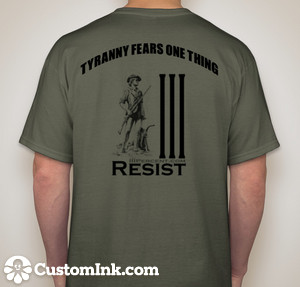 1/22/12-The oldest came home yesterday and showed us picture she took of the test in the "geography" class.  She held fast and did not answer the questions on islam.

If these type religious questions are taking place, they a far above the minimum requirement from the state.  Why doesn't Christianity get equal billing?  You know the answer.

Resist, fight, do anything. But do not sit quietly.

We felt like David back in the Old Testament when he came face to face with Goliath.  This past week my wife and I have been locked in combat with the local school district.

My oldest daughter, who is a freshman, was doing some homework last weekend and she asked me what the 5 pillars of islam were.  That's right.  This was for her AP Geography class along with 4 other questions regarding islam.  No questions like this for Christianity.

We blew a gasket.  My wife told her not to answer the questions and she sent a scathing letter to the "coach" teacher.  Tuesday she came home and said that basically he mocked us said and we were stupid for this.  Oh, and the questions would be in the new "EOC" tests.  These are the new finals for kids in Texas so they can go to the next grade.

Next she sent out a prayer request/info email to our contacts.  Some were teachers that agreed with us.  The next day I spoke with the principal,  who agreed with me that it was wrong.  But what could she do...It was on the state curriculum.  Pass the buck...My hands are tied....Sorry, nothing I can do....yada.....yada....yada.

Below is the state says the school must teach.

Yesterday I went with my wife to the district WMA meeting (Baptist Womens Missionary Auxiliary).  There she put it out for a prayer request.  Those ladies literally gasped when she said that "our" schools were teaching islam, but not Christianity.

By the time we made it home, there was a call from a local very influential family matriarch.  she had already heard about it from the WMA ladies and wanted to find out directly from my wife.  She was fired up about this.  One of her immediate family is a school board member and didn't know about this.

One of her closing comments was "we'll see about this".

After this I decided to contact my state rep just to see how this battle could go.  I spoke to the office manager in Dayton.  she was shocked and we discussed some of this.  She was concerned and after speaking to the rep would get back in touch with me.  Her comments were we are a very conservative district and this is BS.

So as the day dawns, we will see what new battle presents it self.  But we will not back down on this.

Christians, patriots, you know who you are; we must not give concessions anymore.  We have did this for many years.  NO MORE.  we must stand for what we believe in.  Fight for our Rights from the God.  Not let our children be corrupted by the scum that roams the halls of education and indoctrinates them.