With so many Africans in Greece … 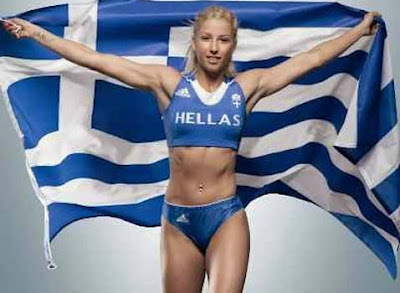 This Olympiad was kicked off the Greek team for the below comment.  I thought it was quite humorous from this hottie.


Greek triple jumper Voula Papachristou was banished from the Olympic Games on Wednesday after making racist comments and expressing right-wing sentiments on Twitter.


“With so many Africans in Greece … at least the West Nile mosquitos will eat homemade food!!!,”

And the horror when she made a comment about the immigration problem in Greece.


She also reposted a comment from controversial Greek politician Ilias Kasidiaris, who has strongly criticized his government’s “soft” immigration policy.


But then she folded.  To bad.


“I would like to express my heartfelt apologies for the unfortunate and tasteless joke I published on my personal Twitter account,” she said. “I am very sorry and ashamed for the negative responses I triggered, since I never wanted to offend anyone, or to encroach human rights.”


That's the problem now days.  People speak what they think and feel, but then crawfish to fit in.

If they don't like what I have to say, don't listen to me.

If I offend you in any way.

It's a 1st Amendment thing.

Then leave my country for some other place.

I don't care as long as it's not America.